The media announcement is that home sales have seen a bump. A 23% increase over February of last year. That sounds like good news, and it is, but the reality is that last February was one of the lowest levels of activity since the late 1990s. So the double-digit increase is good but not as great as it sounds without the full context. 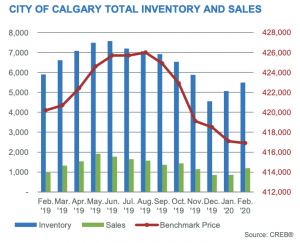 The good news is that it does show that the market is improving and that we are moving toward more balanced conditions. The oversupply is lessening and there is a modest improvement in demand which has helped the prices stabilize and remain similar to January.

Buyer’s are now willing to move quickly if properties are priced right, marketed right, and fair relative to the market place. It is still a buyer’s market but it is also a good time to sell if it makes sense for your circumstances.

If you want a monthly update on your neighbourhood, your property type, and your price point, sign up HERE.

For the detailed market statistics from the Calgary Real Estate Board for February 2020 click HERE.

Contact us directly for the stats on Airdrie, Cochrane, Rockyview, Bighorn or other areas in the Calgary region.