Being a landlord can be a love-hate relationship. On the one hand, there is the potential for profit. On the other, there are messes, cleanups, evictions, and missed payments.

Dennis bought his first house after his first year in the real estate industry. He has since added several more properties to his portfolio through the years, learning the realities of being a landlord. He has also helped over 1,000 clients buy, sell, and own their real estate – and even helped them clean up some messy situations involving an occasional loss.

While he has a book’s worth of horror stories about being a landlord, he’s also seen some amazing results when people with the skills to be landlords take on tenants. That includes great people skills and being handy – or knowing which people to hire when the situation calls for it.

“When it works, it works great,” he says. “But owning real estate is also hard work. Never underestimate it. There is no such thing as passive income.”

Securing a tenant is hard. Collecting rent can be hard, maintaining a property is hard and evictions are extremely hard. Some landlords get lucky, but it’s not usually as simple as buying a property and letting the income roll in. Even though it takes hard work, though, real estate is still one of the greatest wealth generators in history.

Should You Rent or Buy?

Should you Rent or Buy? 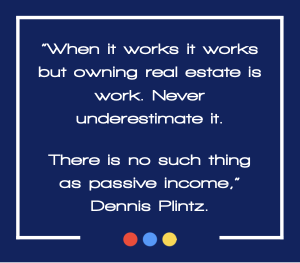 Though he earns his income from helping clients buy and sell real estate,
Dennis says, “just because you can buy it doesn’t automatically mean you should.”

Whether we “should” buy is one of the most common questions a real estate agent is asked. Many agents say yes, buy, buy, buy because they want to earn a commission. We’ll tell you the other side of the story, which is that there can be benefits to renting as well.

Renting is easy and flexible. It offers a lot of freedom and doesn’t tie up your cash. And when the refrigerator dies or the hail storm hits, it’s not your problem. Does that sound right for you?

At the same time, buying can make more sense when you have a secure job, want to place roots in a community, have kids in school, want to put your own touch on a home, or you want a secure place to invest your money.

Whether you’re in the early stages of considering whether to buy a home, ready to jump in, or curious about buying an investment property and becoming a landlord, the Plintz Real Estate team will take the long view for you. We put you and your family first by asking a series of strategic questions to gain the insight needed to help you make the best real estate decisions possible.